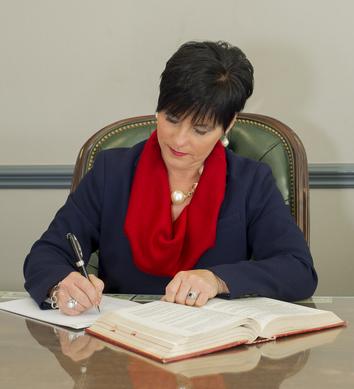 She is currently completing a four-year term as Knox County Commissioner, which will wrap up in September 2020, having been elected to represent the citizens of the Second District in the August 2016 election. The past two years she has served as the Vice Chairperson of the Commission. Michele previously served as Commissioner for Seat 7A from January of 2009 through August of 2010. Her area was redistricted to District 2. She has served on the Court Subcommittee, the Joint Education Committee, Vice Chair of the Rules Committee, Sponsored the Knoxville County Employee Insurance Benefits Committee, the Cable TV Committee, Finance Committee, Insolvency Board, Beer Board, served as the Designee for Tennessee County Commission Association Board where she also serves on the Governmental Affairs Committee and Veterans Committee.

Michele is a life-long resident of Knoxville. She graduated from Central High School in 1980 and attended the University of Tennessee in the College of Communications.

Michele is proud to be married to Dr. Michael Carringer for 39 years and they have raised two children, Dr. Christie Carringer Lewallen, M.D., who is a Hospitalist with her father at University of Tennessee Medical Center, and Kent Carringer, J.D., who works at Carroll, Anderson &
Foust. Christie is married to Grant Lewallen, J.D., who is a partner at Baker, O’Kane, Atkins & Thompson, and they have one daughter, Emma Grace Lewallen who is 7 years old. Kent is married to Jessica Alston Carringer, who is a Nurse Practitioner with University Cancer Specialists. They have one daughter, Olivia Scarlett who is 2 years old, and are anxiously awaiting the birth of Jack Michael Carringer expected in August. The Carringers and their children live in Fountain City and attend church at Sevier Heights Baptist Church.

Throughout her life Michele has been active in her community, serving on numerous non-profit boards and service organizations including the Knoxville Academy of Medicine Alliance, the Akima Club of Knoxville, the Halls Crossroads Women's League, North Knoxville Business and Professionals, the Knox County Foster Care Review Board, Former President of the University of Tennessee Delta, Delta, Delta Mom's Club, The Executive Committee of the 2014 Congressional Medal of Honor Committee, the Broadway Corridor Task Force, the Sertoma Center, Sertoma Center My Life Board, Metro Drug Coalition, Three Ridges Golf Course, Free Medical Clinic of America, Knox County Career Technical Education (CTE), Fountain City Town Hall, and the East Tennessee Epilepsy Foundation. She has served as the Secretary of the Fountain City Lions Club and is Vice President of the Fountain City Company. She also delivers Mobile Meals.